For the fourth consecutive year, Switzerland tops the overall rankings in The Global Competitiveness Report 2012-2013. The report from the World Economic Forum was released on September 5, 2012.

The U.S. has dropped two places, from fifth to seventh, in the latest rankings. This is the fourth consecutive year of decline for the U.S. From the highlights:

The U.S. continues the decline that began a few years ago, falling two more positions to take seventh place this year. Although many structural features continue to make its economy extremely productive, a number of escalating and unaddressed weaknesses have lowered the U.S. ranking in recent years. U.S. companies are highly sophisticated and innovative, supported by an excellent university system that collaborates admirably with the business sector in R&D. Combined with flexible labor markets and the scale opportunities afforded by the sheer size of its domestic economy—the largest in the world by far—these qualities continue to make the United States very competitive.

On the other hand, some weaknesses in particular areas have deepened since past assessments. The business community continues to be critical toward public and private institutions (41st). In particular, its trust in politicians is not strong (54th), perhaps not surprising in light of recent political disputes that threaten to push the country back into recession through automatic spending cuts. Business leaders also remain concerned about the government’s ability to maintain arms-length relationships with the private sector (59th), and consider that the government spends its resources relatively wastefully (76th). A lack of macroeconomic stability continues to be the country’s greatest area of weakness (111th, down from 90th last year). On a more positive note, measures of financial market development continue to indicate a recovery, improving from 31st two years ago to 16th this year in that pillar, thanks to the rapid intervention that forced the deleveraging of the banking system from its toxic assets following the financial crisis. 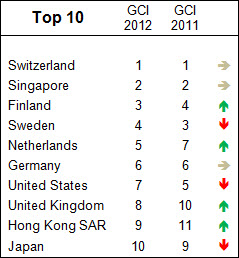 Singapore remains in second position and Finland in third position, overtaking Sweden (4th). These and other Northern and Western European countries dominate the top 10, with the Netherlands (5th), Germany (6th), and United Kingdom (8th). Hong Kong (9th) and Japan (10th) complete the ranking of the top 10 most competitive economies.

The large emerging market economies (BRICS) display different performances. Despite a slight decline in the rankings of three places, the People’s Republic of China (29th) continues to lead the group. Of the others, only Brazil (48th) moves up this year, with South Africa (52nd), India (59th), and Russia (67th) experiencing small declines in rankings.

The report indicates that Switzerland and countries in Northern Europe have been consolidating their strong competitiveness positions since the financial and economic downturn in 2008. On the other hand, countries in Southern Europe, i.e. Portugal (49th), Spain (36th), Italy (42nd), and particularly Greece (96th) continue to suffer from competitiveness weaknesses in terms of macroeconomic imbalances, poor access to financing, rigid labor markets, and an innovation deficit.

Behind Singapore, several Asian economies are performing strongly, with Hong Kong SAR (9th), Japan (10th), Taiwan, China (13th), and the Republic of Korea (19th) all in the top 20. In the Middle East and North Africa, Qatar (11th) leads the region while Saudi Arabia remains among the top 20 (18th). In Latin America, Chile (33rd) retains the lead and a number of countries see their competitiveness improve, such as Panama (40th), Brazil (48th), Mexico (53rd), and Peru (61st). For the complete list of rankings, click this link.

“Persisting divides in competitiveness across regions and within regions, particularly in Europe, are at the origin of the turbulence we are experiencing today, and this is jeopardizing our future prosperity.” said Klaus Schwab, Founder and Executive Chairman, World Economic Forum. “We urge governments to act decisively by adopting long-term measures to enhance competitiveness and return the world to a sustainable growth path.”

Xavier Sala-i-Martin, Professor of Economics, Columbia University said: “The Global Competitiveness Index provides a window on the long-term trends that are shaping the competitiveness of the world’s economies. In this light, we believe it offers useful insight into the key areas where countries must act if they are to optimize the productivity that will determine their economic future.” 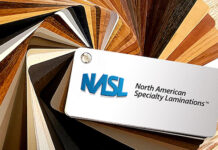