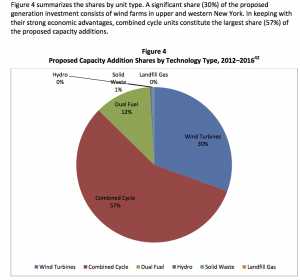 The American Public Power Association (APPA), National Rural Electric Cooperative Association (NRECA), and the New York Association of Public Power (NYAPP) have released a new study of the capacity market operated by the New York System Operator (NYISO). In the study, Dr. Matthew Morey and Dr. Laurence Kirsch, both economists at Christensen Associates Energy Consulting, found that there are numerous drivers of the construction of new generation other than the NY ISO capacity market, including utility obligations to serve, reliability standards, renewable portfolio requirements, and environmental regulations. Moreover, a significant portion of the new generation has been financed not by volatile market revenues, but by bilateral contracts, utility ownership, or New York State Energy Research and Development Authority (NYSERDA) renewable energy programs. For example, 77% of the new generation planned through 2016 is being constructed under long-term bilateral contracts or utility ownership.

“The study is a welcome addition to the discussion in New York about whether to change how utilities are fundamentally able to meet the power supply needs of consumers, and we thank APPA and NRECA for helping sponsor it,” said Paul J. Pallas, President of NYAPP.

In contrast to the mandatory capacity markets operated by the neighboring regional electricity markets in the mid-Atlantic and New England, the NY ISO operates a voluntary capacity market that the study finds “provided a workable complement to the bilateral market, utility-owned supply, and NYSERDA and federal tax-supported renewable resources.”

The study, entitled New York State Capacity Market Review, provides a comprehensive review of electricity generation built in the state between 2000 and 2012 and new generation construction planned through 2016. Based on this detailed analysis, Morey and Kirsch conclude that New York has succeeded in “providing generation capacity where it is most highly valued, using diverse fuels and meeting a variety of renewable resources and environmental policy goals.  This success has been achieved without resorting to a mandatory forward market.”

The study is available as a pdf download here.