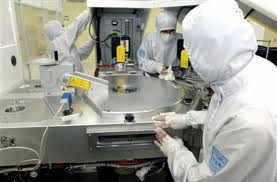 In the middle of the $6.5-billion College of Nanoscale Science and Engineering (CNSE) complex in Albany, NY stands an 80,000-square-foot cleanroom like no other facility in the world.

The CNSE cleanroom is the Mecca of the global semiconductor industry, a place where 22-nanometer microchip circuits are born and sent forth to proliferate into the latest generation of mobile devices across the planet. Technicians from more than 250 leading semiconductor producers make regular pilgrimages to this unique lab a stone’s throw from the Hudson River.

As Business Facilities detailed in our October 2010 cover story, cooperation, not competition, is the governing principle at the CNSE lab. Technoids from all the microchip giants — Intel, Samsung, IBM, GlobalFoundries, etc. — stand shoulder to shoulder in the Albany cleanroom in a collaborative enterprise in which major players have formed research alliances to move semiconductor technology to the next level.

This type of molecular-level interaction (measured in nanometers one-billionth of a meter thick) is worth keeping in mind as we contemplate Apple’s great legal victory over Samsung in the global smartphone war.

It took only three days of deliberations last week for a California jury to reach a verdict in the biggest patent dispute in history. The nine-member panel found that Samsung violated six Apple patents when the South Korean electronics giant created its Galaxy smartphones and challenged the global hegemony of the iPhone. The jury, sitting in San Jose within shouting distance of Apple’s Cupertino headquarters, awarded Apple $1.05 billion in damages.

Apple’s share price, already at record levels, soared to more than $680 after the verdict was announced. Samsung shares predictably nosedived, a trend that accelerated when Apple immediately demanded that the court prohibit Samsung from selling its red-hot Galaxy smartphones and tablets in the U.S. market.

Case closed, right? Not so fast.

Hidden in the heart of just about every iPhone and iPad is something that tells us this steel-cage death match eventually will end with a handshake and a hug. That something is a Samsung semiconductor chip.

Towards the end of Bloomberg BusinessWeek‘s latest update on the global legal battle between Apple and Samsung, this startling factoid appeared: Apple actually is Samsung’s largest semiconductor customer. According to a Bloomberg supply-chain analysis, Apple accounts for nearly 9 percent of Samsung’s global revenue.

Apple’s reliance on Samsung chips for its best-selling phones and tablets will be worth as much as $7.5 billion to Samsung this year, a 60 percent jump from 2011, Gartner Inc. estimates. Apple CEO Tim Cook said at a conference earlier this year that “the engine” for the iPhone and iPad is made in Austin, TX (without mentioning Samsung).

Samsung and Apple’s interdependence apparently goes back to the very beginning of the iPhone. The two companies, which had already worked together in screens and memory chips, cut a deal that resulted in Samsung becoming the sole manufacturer of the so-called A-series of chips, which are at the heart of the iPhone and iPad, Bloomberg reports.

One can only imagine Steve Jobs’ rage when the late Apple founder discovered that his technology partner was preparing to roll out an iClone. A few months before he lost his battle with cancer, Jobs opened his legal silos and launched a thermonuclear patent war against Samsung on four continents.

Victory has been declared, but it’s not hard to see the outlines of a reasonable settlement. A limited license of certain iPhone and iPad features to Samsung, say, in exchange for a $2-billion discount on next-generation A-series chips. Let’s call it an adjustment between long-term business partners.

Within hours of the patent dispute verdict, Samsung announced a $4-billion investment in its Samsung Austin Semiconductor facility to increase the plant’s capacity to produce mobile processing units used in smartphones and tablets.

It says here a car can’t go very far without its engine.