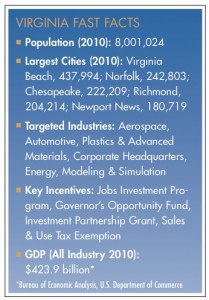 Virginia has been making headlines as a great state for business with several favorable factors. It is a right-to-work state, has a fixed 6 percent corporate income tax rate and has one of the lowest average workers’ compensation costs and unemployment burdens in the U.S., which gives it the advantage of stable and low operating costs for business.

CNBC ranked Virginia as America’s Top State for Business for 2011. It received the highest point total in the history of the rankings, finishing in the top-half of every category. Virginia also was a leader in the Forbes.com Best State for Business review and was Pollina Corporate Real Estate’s 2011 Top Pro-Business State for the third consecutive year, with the largest victory margin in the study’s history.

Virginia offers a talented work force, more than 500,000 students enrolled in over 100 in-state institutions of higher education and easy access to domestic and global markets through Washington Dulles International Airport, the Port of Virginia and two of the nation’s largest railroads.

Virginia is birthplace of the Internet and one of the leading centers of software development. And as one of four U.S. states currently licensed and capable of launching communications satellites and other commercial payloads into space, Virginia has all the right assets to continue its economic leadership throughout the century. 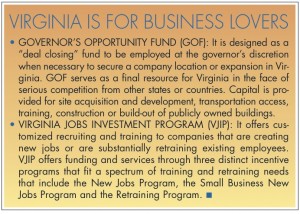 In fact, according to the 2010 State New Economy Index published by the IT and Innovation Foundation and the Ewing Marion Kauffman Foundation, Virginia ranks among the top 10 states best prepared to navigate the changing economy in terms of being knowledge-based, globalized, entrepreneurial, IT-driven and innovation-based.

Capital One Financial Corp. is making use of these assets. Gov. Bob McDonnell announced in June that the company will create at least 50 jobs and invest more than $150 million to establish a new data center in Chesterfield County—part of Capital One’s core IT infrastructure that incorporates new technologies for customer needs.

Founded and headquartered in McLean, Virginia, Capital One is the country’s sixth largest bank based on deposits, and with the acquisition of ING Direct, is now the largest direct bank in the country, employing more than 14,000 associates in Virginia.

The Virginia Economic Development Partnership worked with Chesterfield County and the Chesterfield ED Authority to secure the project, while Gov. McDonnell approved a $500,000 grant from the GOF to assist. The company also will receive a sales tax exemption on eligible data center computer equipment. Through its VJIP, the Virginia Department of Business Assistance will provide funding and services to support recruitment, training and retraining activities.

Dana M. Pittman, President and CEO of PPI/Time Zero, said that the strategic location of Waynesboro and amenities offered by Solutions Place were key considerations in its decision to expand into Virginia.

“The location at Solutions Place is ideal due to the infrastructure in place at the facility, as well as the region’s strategic proximity to major interstates and the company’s existing and potential clients,” said Gov. McDonnell.

PPI/Time Zero, is seeking to hire 60 to 100 new employees from Central Virginia within six months to two years after remodeling at the Solutions Place is completed. Many of the new hires will be skilled workers, and many of those will have a background in engineering.

Greg Hitchin, Director of Economic Development for the City of Waynesboro, said PPI/Time Zero fits perfectly into its strategy of luring more skilled manufacturing to the area.

The Virginia Economic Development Partnership worked with the City of Waynesboro and the Shenandoah Valley Partnership to secure the project for the state. Through its VJIP, the Virginia Department of Business Assistance will provide funding and services to support the company’s recruitment and training activities.

Terremark Expands for a Third Time in Culpeper
Based on the success and growth of its customer base at the NAP (Network Access Point) of the Capital Region, Terremark Worldwide, Inc., a leading global provider of managed IT infrastructure services, recently expanded its operations in Culpeper. With more than 75 percent of the data center space within the campus’ two existing facilities contracted and a robust pipeline for Terremark’s leading-edge IT infrastructure solutions from Federal agencies and large enterprises, the company needed to build a third 50,000-square-foot facility. 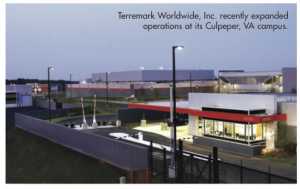 “Our position as the leading cloud computing provider for Federal government agencies, along with the heightened drive for greater efficiency for IT systems within the U.S. government and the increase in IT spending trends among enterprises, has helped fuel our success in Virginia,” said Manuel D. Medina, Terremark’s Chairman and CEO.

Terremark acquired $5 million in additional land to add at least 250,000 square feet of high-quality data center space and close to 100,000 square feet of Class A office space, effectively doubling the size of the campus. Along with the world-class data center facilities, Terremark also unveiled a 72,000-square-foot headquarters building that features a 150-seat auditorium built to the federal government’s Physical Security Standards for Sensitive Compartmented Information Facilities.

Culpeper’s geography, technology and quality of life were instrumental in attracting Terremark. This NAP of the Capital Region represents the state-of-the-art in Network Access Points and will fulfill the company’s stated objective to expand in the Washington, D.C. area.

Terremark has designed a master plan that will allow for modular growth of the campus. It calls for five data center facilities that can each yield approximately 50,000 square feet of colocation space. Every one would be a highly secured, stand-alone structure that could house either commercial or government customers.