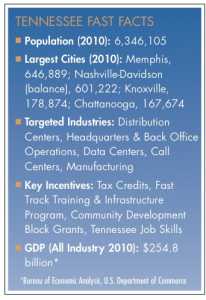 The southern states are known for smart, savvy and successful approaches to economic development and Tennessee is no exception. With scenic swatches of pastoral landscape and urban hubs like Memphis, Nashville and Knoxville, Tennessee is capitalizing on its diverse markets with a new tool which, it hopes, will become an industry standard bearer.

In June, the Tennessee Department of Economic and Community Development (ECD) launched the Select Tennessee Certified Sites Program (www.selecttennessee.com), a new, statewide endeavor that assesses, certifies and promotes available sites for relocations and expansions. Since the site selection industry does not have a universally agreed upon set of criteria for a first-rate site, Tennessee entrusted two consulting firms and its economic development officers to create a menu of rigorous benchmarks which sites must meet in order to qualify as “certified.”

According to Kendrick Curtis, Technical Program Director of the ECD, “The program is designed to be an industry standard for site preparedness. Each aspect has its own purpose and meaning. For example, it is important that the technical studies and surveys—environmental site assessments, wetland delineation, geotechnical studies—be prepared in order for the prospect to feel confident that they have a clear picture of the environmental condition of the site.” 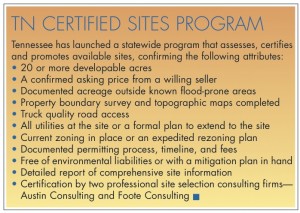 Curtis continues, “Infrastructure to serve the site (whether roads or utilities) must be directly available or be able to be improved/extended in a short timeframe. A clear path to acquiring or leasing the property must be identified and documented. Similarly, information about the site such as its zoning, surrounding land uses, previous uses, and proximity to the flood plain are all information important to establishing and communicating the character and condition of the site to a prospect.”

As mentioned earlier, Tennessee is a popular business destination thanks to its rural and urban site preparedness. Curtis says the Select Tennessee Certified Sites Program will help all state communities. “The program is not designed to favor sites in one setting over sites in another. The focus is to establish a level of site preparedness necessary for corporate investment.” He elaborates, “Locations in urban areas may have more sites that are at or close to this level.  However, many rural sites will also be able to achieve this certification and be competitive with sites in this and other certification programs.  It is important to recognize the value that the level of preparedness offers and to understand that this has benefits to both urban and rural areas alike.”

The ECD began looking intently at developing a site certification program in August 2011. Select Tennessee was officially launched the week of June 18, 2012 and is intended to be an ongoing program. In the short time since the program was launched, 14 communities with sites they would like to certify have sent letters of intent. The ECD expects these and others to be included in the first round of application acceptance and review later this summer and into the fall. Part of the value of becoming a Select Tennessee Certified Site is in the marketing of the program. The SelectTennessee.com website is the first step for marketing the certified sites to consultants and business leaders. The information gathered in the certification process will provide a full picture of available sites in Tennessee.

While its innovative site certification program is designed to streamline the search process for site selectors and highlight the best of the state’s options, many existing companies have decided to stay put and grow. The top five major expansions in Tennessee in the second quarter of the year created several thousand new jobs and lured nearly $70 million in investments. Magneti Marelli Suspension expanded in Pulaski adding 800 jobs and $53.7 million while in Clarksville, Agero announced its new facility which will create work for 549 Tennesseans and pump $8.2 million into the economy. TRG Customer Solutions plans to hire 466 new workers in Spring Hill while La-Z-Boy will add 418 to its workforce in Dayton. And Team 3 Logistics in Chattanooga is growing with a $1 million investment and 150 new jobs.

According to Kingsley Brock, Assistant Commissioner of Business Development at the ECD, “Tennessee’s state government has demonstrated a real commitment to the issues that matter to business. Our state is on the cutting edge of public education reform and tort reform. We also have one of the best balance sheets in the country with a very low debt burden. As a state, Tennessee is a solid partner.”

Brock credits strong governorship as a key factor in setting Tennessee apart from other locations in the Southeast. “Gov. Bill Haslam’s extensive business experience gives him a unique perspective. He understands the needs of businesses and the role government plays in fostering a business climate that encourages growth. Gov. Haslam has also filled his cabinet with commissioners in key positions that understand business.”

In May, Gov. Haslam signed legislation expanding the state’s FastTrack economic development incentive program. New legislation created the FastTrack Economic Development Fund, an expansion of ECD’s current infrastructure and job training program. The new program is designed to help companies with retrofitting building, relocation expenses and equipment when the project will have a significant impact on the local community.

Brock lauds Tennessee’s workforce and location as two of its biggest draws. “Tennessee has a very skilled manufacturing employee base with expertise in engineering, electronics, robotics, CNC operation, and so on. The influx of talent moving here from across the county continues to support the numerous headquarter and back office relocations and expansions occurring throughout the state.” Tennessee was one of the first two states in the nation awarded $501 million in Race to the Top funds for education reform.

Brock continues, “We offer unparalleled efficiency and proximity to global customers with the world’s second busiest freight airport in Memphis, immediate access to eight major interstate highways and an extensive network of railways and waterways.”

With a business-minded governor, a new site certification program, rapid expansions and an eager workforce, Tennessee seems to have secured its place in the sun for quite a while. 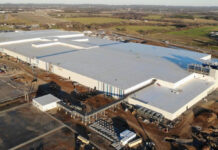