Home » Economic Development » Daily News » Made in Where? 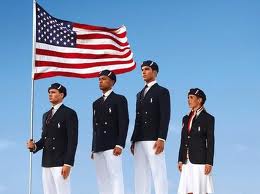 There’s been a lot of talk about outsourcing lately (or, if you prefer, “offshoring”).

Predictably, every time a presidential election cycle rolls around, the rhetoric gets overheated about who is responsible for shipping all the jobs to China. This usually is accompanied by some chest-thumping about cracking down on China for its unfair trade practices and dumping of subsidized goods in the U.S.

Then the noise dies down and we all go back to scooping up all the cheap stuff from China we can get our hands on. It’s sort of like complaining about drug trafficking in Mexico while ignoring that most of the drugs are consumed by the people up North.

The latest brouhaha is a good case in point of how insidious our addiction to cheap Chinese goods has become. It turns out the berets, blazers and pants the U.S. Olympic team will wear in the opening ceremonies of the upcoming London Games were made in — OK, everybody say it together — China. The duds were designed by Ralph Lauren, whose company also is a sponsor of the U.S. team.

The disclosure that our Olympians will be dressed in Chinese threads has propelled numerous members of Congress into hyperventilating displays of outrage. “I think they should be embarrassed,” said Senate Majority Leader Harry Reid of Nevada. “I think they should take all the uniforms, put them in a big pile, and burn them and start all over again.”

Sen. Reid went on to suggest the U.S. athletes walk into the Olympic stadium in London sporting nothing more than red, white and blue body paint.

The U.S. Olympic Committee (USOC), which placed the order with Ralph Lauren, applied some verbal balm to the controversy. “Unlike most Olympic teams around the world, the U.S. Olympic team is privately funded and we’re grateful for the support of our sponsors,” USOC spokesman Patrick Sandusky said. “We’re proud of our partnership with Ralph Lauren, an iconic American company, and excited to watch America’s finest athletes compete at the upcoming Games in London.”

Observers also noted there were no complaints when Toronto-based Roots created the U.S. clothing for the Salt Lake City Games in 2002 and for Athens in 2004.

To put this in perspective, there is a city in mainland China which does nothing but produce socks. Millions of socks, virtually all of the socks that are worn on the planet. When he rose on the Senate floor to denounce the USOC, Sen. Harry Reid was wearing socks.

Wanna bet they were made in China?