By Business Facilities Staff
From the May/June 2012 issue

Four new economic development incentives are moving through the Louisiana legislature. We asked state Economic Development Secretary Stephen Moret to tell us how they would work.

BF: How does the new Corporate Tax Apportionment program give Louisiana an advantage competing for new projects?
SM: Some states have double or triple factors for corporate income tax apportionment. Single factor apportionment based on sales is the most attractive. We have single factor apportionment today for manufacturing. What the new bill will do is enable us to offer single-factor for any project for 20 years. It’s not just a temporary benefit; it facilitates a meaningful, long-term forecast. So we think this is going to be a really unique competitive edge for us.

They may need to speed up completion on the new National Cybersecurity Data Center, a $1.5-billion facility rising on the salt flats at Camp Williams near Salt Lake City, UT. Ground was broken in January for the new center, which is expected to create up to 15,000 jobs when it opens next year as the crown jewel of the U.S. defense against cyber-terrorism.

The FEMA report praised the coordination between federal, state and local officials for sharing information and intelligence, and the ability of authorities to deploy lifesaving and life-sustaining operations quickly.  But FEMA also said cybersecurity “was the single core capability where states had made the least amount of overall progress” and that only 42 percent of state and local officials believed that their cybersecurity was adequate.

BF: Of the proposed new incentives, you’ve indicated that the new competitive payroll rebate will be the biggest catalyst for new development. What makes you confident the new rebate will spur project growth?
SM: The job-creation rebate programs now available in the country typically range from 3 to 6 percent. This program will permit an annual rebate on new payroll of up to 15 percent for 10 years for eligible operations. It’s primarily targeted at some of the durable goods manufacturing sectors where we’ve not traditionally been competitive. It’s double or triple what’s available in other states.

BF: That’s a very generous incentive. How can you make sure Louisiana will get a maximum return on its investment?
SM: The incentive will only be available for net new jobs in the state of Louisiana and there will be a strict return on investment requirement. They’re paid on the basis of what they produce. We’re calculating the value to the state of each incremental dollar of payroll for that type of operation. It’s not paid on the front end, only after they have produced results. There is no risk to the state.

BF: What are the target industries for the payroll rebate program?
SM: Automotive assembly and aerospace [projects] would be eligible. We’re trying to catalyze new growth industries in Louisiana where we either don’t have that industry at all today or where we only have it to a very small extent. us. We can also add sectors over time to the program.

BF: You have proposed an expansion of property tax exemptions to non-manufacturing operations. Why is that necessary?
SM: We have the lowest state and local tax burden in the country for new manufacturing operations in part because we have a 100 percent property tax exemption for the first 10 years of operation, but we are 42nd for distribution facilities because they don’t get that exemption. This proposal would provide a 90 percent exemption for 10 years for capital-intensive, non-manufacturing facilities like distribution facilities, large-scale data centers and corporate headquarters. It will take us from an uncompetitive situation to one that is very competitive. 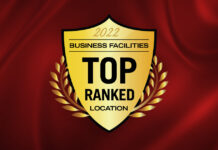