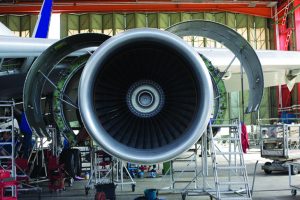 Washington, anchor of the Pacific Northwest, is the global leader of the aerospace industry. Its legacy began in 1903 when William Boeing, then an engineering student at Yale, moved to Washington to pursue the lumber business. In 1909, Boeing’s fascination with aircraft began at the world fair in Seattle when he saw a manned flying machine for the first time. By 1916, Boeing started building seaplanes and his company later put Seattle on the global aviation map.

Today, the Seattle area (which includes Everett, Bellevue and Renton) has the highest concentration of aerospace jobs in the world. As of 2011, all commercial aircraft over 100 seats built in the U.S. are assembled and delivered in Washington State.

In 2010, Boeing, which is among the largest global aircraft manufacturers by revenue, delivered 462 airplanes to customers throughout the world, all of which were assembled in the company’s plants in Renton and Everett, Washington. With 787 deliveries and production rate increases for 737s and 777s this number is expected to grow in 2012 and beyond.

Boeing’s production is supported by approximately 650 aerospace-related companies located in 28 counties in the state. Employment at Boeing and the other firms in the industry stood at 84,000 employees in early 2011. Each job in the industry generates nearly three additional jobs throughout the economy, so that aerospace is responsible for about 250,000 jobs in the state.

The future of Washington’s aerospace industry was determined in December 2011 when Boeing announced it would locate its new 737 MAX jetliner facility in Renton located in King County, Washington, after signing an agreement with its machinists union. According to Washington Governor Chris Gregoire, this announcement is a once-in-a-generation opportunity for the state and “likely the largest manufacturing contract in the world for at least a decade.” The facility is expected to create up to 20,000 direct and indirect jobs.

The state was able to secure the project thanks to a major aerospace industry initiative launched by Gregoire last year. To help spearhead the effort, the governor created the Washington Aerospace Partnership, a coalition of civic and business organizations that support and sustain the growth of the local aerospace industry.

Gregoire and members of the Washington Aerospace Partnership were well aware that Boeing could consider establishing its facility at another location, so they set out on a mission to ensure that Boeing would choose Washington. They commissioned a study by Accenture, a management consulting firm with offices worldwide, to compare different contender states’ aerospace manufacturing strength.

The analysis determined what actions or policy initiatives could be taken to improve the state’s attractiveness to Boeing for the final assembly of the 737 MAX and to make long term investments for strengthening Washington’s aerospace cluster. Accenture examined Washington’s competitiveness across a range of qualitative factors, and conducted a thorough quantitative analysis of Boeing’s potential return on investment from selecting a 737 MAX assembly site in eight states with existing or emerging aerospace industries.

The recommendations helped form Gregoire’s action plan which included $9.8 million in state spending including aerospace-related education and training incentives, the creation of a new Governor’s Aerospace Office to oversee the development of the state’s aerospace center, and a 10-year extension of an existing aerospace tax incentive.

The action plan not only helped the state win the 737 MAX, it will also boost education and workforce training to strengthen its aerospace industry for the long-term. The aerospace initiatives included:

In addition to building its new 737 MAX facility in Renton located in King County, Boeing also announced it plans to close its Wichita defense plant in 2012 and move some of that work to the Puget Sound area. As a result, Clark County economic development officials have announced a new plan to help prepare for the anticipated growth.

In January, lead economic development officials announced they are working to expand Boeing’s footprint in the region by strengthening Boeing’s regional supply chain. Lisa Nisenfeld, president and CEO of the Vancouver, Washington based Columbia River Economic Development Council has formed a taskforce to spearhead the effort.

Nisenfeld said its plans include recruiting Boeing suppliers and former workers from Wichita and working with existing suppliers to explore growth opportunities.

Washington has a comprehensive statewide training system that directly links the global aerospace industry demand and new technologies with innovative partnerships for education, targeted training and joint apprenticeship programs, including: