The county seat of York County, York is the 14th largest city in Pennsylvania and is within 25 miles of Gettysburg, 45 miles of Baltimore and 100 miles of Washington, D.C. and Philadelphia. With small town charm and big city appeal, the south-central City is known as the White Rose City after the symbol of the House of York and is home to more than 40,000 residents in a 5.2 square mile radius. Consistently ranked #1 in quality of life categories amongst regional cities, York is affordable with a cost of living index of 94.5 (U.S. average is 100), low amounts of air pollution and much to offer everyone as evidenced by its support of two daily newspapers. 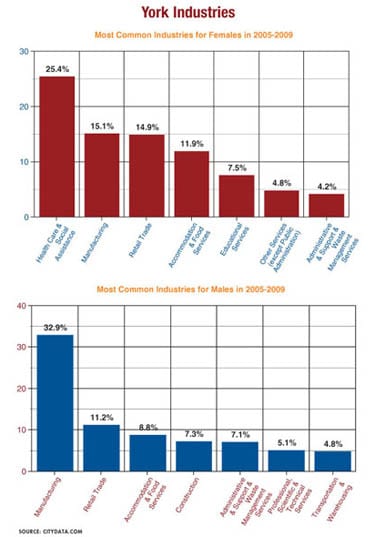 The petite area packs a heavy punch. York boasts two downtown farmers’ markets, 24 parks, an elegant hotel designated as a National Trust Historic Hotel of America, six museums and a Visitors’ Center, a Symphony Orchestra, downtown access to a 42-mile nature and jogging trail, 34 outdoor murals and mini-murals and the recently renovated Strand-Capitol Performing Arts Center, which brings many nationally acclaimed acts and independent and foreign films to the City.

Outdoors and recreation are an important part of York. The city has 10,000 trees and has been honored by the National Arbor Day Foundation for 18 consecutive years as “Tree City, U.S.A.” It also encompasses 20 baseball and softball diamonds, an ice rink and 21 golf courses within a 30-minute drive—second only to Myrtle Beach, South Carolina in terms of golf courses per capita.

York also houses the venue with the tallest wall in baseball. At 37 feet, 8 inches, the left field wall of Sovereign Bank Stadium surpasses the height of the Green Monster at Boston’s Fenway Park. The City has one professional sports team, the York Revolution (plays in the independent Atlantic League of Professional Baseball) and is home to the “Plywood Hoods”, a group of BMX freestylers and the York County Silver Bullets semiprofessional football team (Colonial Football Alliance).

York plans to connect streetscaping enhancements; erect antique-styled lights that emit bright, white light; and add colorful, historical-themed murals throughout the downtown, thereby improving the aesthetics, charm and walkability of the City. In conjunction with these improvements, they are also working on cultivating niche districts in downtown York—an Arts District, Antiques District and Heritage Tourism District—to expand on recreational, commercial and educational opportunities for residents, to bolster neighborhood and civic pride and to stimulate more economic activity.

York Barbell, a reseller of weight training and bodybuilding equipment and location of the USA Weightlifting Hall of Fame inhabits the City, as does a Harley-Davidson motorcycle factory, which employs roughly half of the company’s production workforce. Voith Siemens Hydro and American Hydro, two major manufacturers of modern hydropower water turbines and the animal cracker producer Stauffer Biscuit Company also reside in the City. Headquarters situated in York include York International, a Johnson Controls Company and The Bon-Ton, a regional department store.

With more than 69 percent of the population of those 25 years and older having completed high school or higher and 10.6 percent having received a Bachelor’s or higher, The York College of Pennsylvania, Penn State York, YTI Career Institute (YTI), York Business Institute (YBI), York Culinary Institute (YCI), York Time Institute, HACC’s (Harrisburg Area Community College) York Campus, and The Art Institute of York-Pennsylvania are all convenient options for those seeking further education in the city.

I-83 offers easy access to MDT, Route 30 (America’s first highway), I-95, and I-76 (Pennsylvania Turnpike). Just north of the Mason-Dixon Line, York is served with multiple bus routes by Rabbit Transit public transportation, Greyhound, and Capitol Trailways. There is also frequent Amtrak train service to Philadelphia via Lancaster, located 24 miles East. The York Airport (THV) is seven miles southwest in Thomasville and many residents use either Baltimore-Washington International (BWI) or Harrisburg International Airport (MDT) for long distance travel.

• Fresh Foods Fund (FFF) – Based on a grant from the U.S. Department of Agriculture and seed money provided by the City of York Redevelopment Authority, the FFF is a revolving loan fund to help entrepreneurs and business owners start and expand successful restaurants and other food service establishments in an effort to bring jobs and economic prosperity to the City.