The ongoing crisis at the Fukushima Daiichi nuclear power plant in Japan has prompted several countries to rethink their plans for expanding nuclear power.
Three of the six reactor containment facilities at the Fukushima station were damaged by the earthquake and tsunami that took place in northeastern Japan on March 11. At press time, engineers at the plant were struggling to stabilize tons of spent reactor fuel at the crippled facility. The plant workers can only work in brief shifts due to intense radiation.
A few days after the crisis erupted, German Chancellor Angela Merkel announced that Germany would reconsider extending the lifespan of its nuclear power plants.
“The events in Japan have shown us that even things that seem all but impossible scientifically can in fact happen,” Chancellor Merkel said at a news conference held in Berlin.
Tennessee Valley Authority executives, meanwhile, reassured utility customers that TVA reactors in East Tennessee and North Alabama are in areas “not prone to frequent or extremely large earthquakes” and have numerous safety features.
Radiation that has seeped out of the Fukushima plant has been detected as far as Sweden. 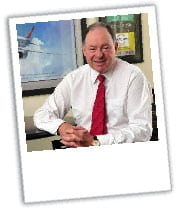 This month, Memphis is hosting the global Airport Cities Conference & Exhibition. We asked Mr. Perl about recent developments at the Memphis Aerotropolis.

BF: Will the recent consolidation of Memphis economic development efforts under the EDGE program include the Memphis Aerotropolis?

AP: The EDGE program is an umbrella organization where someone who is looking for economic development incentives for expansion or a new facility will go before a single board. Our Aerotropolis is not part of EDGE.

BF: What are the latest developments at the Memphis
Aerotropolis?

AP: We recently received a seven-figure grant from the U.S. Department of Housing and Urban Development. Part of the funding from that grant will be used to develop a formal master plan for the Aerotropolis that will embrace the transportation assets [of the area] and the connectivity of the multi-modal Aerotropolis hub.

BF: Memphis is widely recognized as the leading Aerotropolis in North America. Was that achieved without a master plan?

AP: We’ve never had a formal master plan for Aerotropolis.
Everything was done rather independently, with expansion of the various entities including the airport, the rail, the river and the roads. There wasn’t a formal game plan linking to these different assets. Ever since the Aerotropolis steering committee was created, a need for a master plan was identified. This HUD grant will enable us to do that.

BF: What is the timetable for completion of the master plan?

AP: The timetable is to have the plan completed and ready for approval in the latter part of 2012.

BF: What are your expectations for this month’s Airport Cities Conference & Exhibition in Memphis?

AP: We expect the Airport Cities Conference to bring in up to 600 participants from the world’s biggest airports. We expect it to be the largest turnout for this conference to date. We have a powerful program, including keynotes from Fred Smith [CEO of FedEx] and Richard Anderson [CEO of Delta Airlines]. We’ll be having a tour of the FedEx hub and the Aerotropolis.

AP: We’re the only dual hub (cargo and passenger) airport in the United States, with an annual economic impact of $28.6 billion. We’re also the third-largest railroad corridor in the U.S., with five Class I railroads. We’re the third-largest trucking corridor and the fourth-largest inland port.