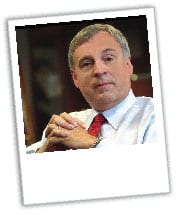 Neal Wade left St. Joe Co. eight years ago to become director of the Alabama Development Office. He is now returning to St. Joe to spearhead the West Bay development in northwest Florida.

BF: What attracted you to this opportunity and what do you bring to the table?

NW: I’m bringing a whole new set of values and experiences I didn’t have before. If you’ve only been on the corporate side, state government can be a shock. It’s really been an education to me to learn how to navigate through all levels of government. I’ve also made a tremendous amount of contacts internationally as well as here in the U.S., especially among projects that we’re going to be targeting and among site consultants throughout the country.

BF: Are there specific lessons you’ve learned in your state post that you can apply to your new position?

NW: Government does not operate at the same pace that the private sector does–you don’t have the same abilities to make decisions inside state government that you do on the private side. It’s much slower [at the state level]. So you really have to pick your battles and figure out how you’re going to work within the system. It’s also really brought into focus that to be successful, you have to have a team: not just St. Joe, but local and state government, the new governor, all of those elements have to be part of the success we’re going to have down there.

BF: How challenging is the economic environment in northwest Florida today?

BF: What are the biggest selling points for West Bay?

NW: In northwest Florida what we have to offer is an unparalleled quality of life, a workforce that can be trained to fit the companies we’re going to be targeting and we’re going to have a new set of sites that we’re going to make available over the next three years that weren’t available seven years ago. There are 1900 aerospace and defense businesses in northwest Florida, and when you combine that with the type of sites we will have available we’ve got a tremendous selling point. We also are changing the perception that the region is strictly a tourist destination rather than a major business location.

BF: How important is the new Northwest Florida Beaches International Airport to the West Bay development?

NW: It is crucial to what we are doing in northwest Florida. You have people able to get in and out a whole lot easier. It also is going to bring sites that surround that airport into play. The airport is going to be the tipping point for the development of NW Florida.

The largest public transit project in the nation—which was earmarked to receive the largest single allocation of federal stimulus dollars—apparently has died on the relentless budget-cutting sword wielded by New Jersey’s governor.

Gov. Chris Christie abruptly announced earlier this month that New Jersey is pulling out of an $8.7-billion project to construct a second rail tunnel under the Hudson River.

Ground already had been broken for the rail tunnel, more than $3 billion in federal financing had been arranged, and more than 6,000 construction jobs were in the process of being filled for the shovel-ready project.

The rail tunnel has been in the planning stages for decades as an alternative route into New York City for NJ Transit’s northern rail hub. The Garden State’s commuter rail giant currently relies on two tracks that go through a single century-old tunnel that is approaching its capacity limit.

After learning that original estimates for the project had ballooned by at least $2.5 billion, Gov. Christie said New Jersey could not afford its one-third share of the project’s cost. The rail tunnel funds reportedly will be reallocated to fill a yawning deficit in the stat’s highway and bridge repair fund.