TULSA IS WELL ROUNDED FOR COMMUNITY AND BUSINESS

Nestled in the northeastern corner of Oklahoma with over 389,000 residents, Tulsa lies 700 feet above sea level and offers a temperate climate and rich cultural legacy along with a cost of living 8.6 percent below the national average. The city has the fifth lowest cost for doing business in the nation and a widely diversified business base, which includes nationally prominent companies in aerospace, telecommunications, manufacturing and distribution and employment balanced among several job sectors such as construction and healthcare.

For an unprecedented third time in five years, the Tulsa Metro Chamber has received the Chamber of the Year Award from the American Chamber of Commerce Executives (ACCE). Chamber of the Year is awarded for work in Leading Businesses. Leading Communities.™ and recognizes excellence in operations, member services, financial performance and community leadership.

The Tulsa Metro Chamber was also acknowledged by Business Retention and Expansion International (BREI) for its new BRE program. In August, the chamber accepted the Multi-Community/Regional award at the BREI/Southern Economic Development Council (SEDC) Joint Conference, an award given annually to recognize innovative, effective and exemplary BRE programs for a population of more than 100,000. Tulsa’s peer-to-peer outreach BRE program was launched in September 2009 to offer support in barriers to growth, expansion, regulatory processes, mergers and workforce issues; it has resulted in at least 10 expansion projects, 350 new jobs and more than $66 million.

In addition to BRE recognition, the city received another first from the SEDC; the association announced Tulsa as the location for its 2013 conference. Presented annually to provide information and enhance leadership best practices for economic professionals in the American South, the conference will bring more than 300 people with an estimated economic impact of $377,990 for the Tulsa region. Dan Motley, secretary/treasurer of SEDC and chair of the 2013 site selection committee said, “what made the difference in Tulsa was the enthusiasm, the coordination and the motivation of the local planning committee.”

2010 also saw the launch of The Forge, a business center created by Tulsa’s Young Professionals (TYPros) to accelerate the development, success and sustainability of start-ups and existing small businesses in the region. It includes a physical space for the businesses (similar to an incubator), a meeting place for entrepreneurs and a resource of knowledge for creating the next generation of business leaders.

And although Oklahoma’s 21st Century Quality Jobs program became effective November 1, 2009, Lansing Trade Group is the first company to qualify (average wage of the jobs created must be at least $94,418) for the incentive that rewards businesses with a highly skilled workforce. Lansing is eligible to receive a cash rebate of up to 10 percent of the new taxable payroll it adds to the state. Tulsa Metro Chamber’s economic development division collaborated with the Oklahoma Department of Commerce to bring the project to Tulsa.

This year has been a busy one for the city. 18 months in the making, Octavian Security USA has established a U.S. headquarters in Tulsa, attracted by its competitive business rates and pro-business atmosphere for new companies. “Tulsa is a great city with real growth potential for us in the next five to 10 years,” said Sukhi Ghuman, one of Octavian’s entrepreneurs. “This is why we decided to begin our U.S. operations here. The warmth of the Oklahoma people made it an easy choice.”

Expo Square, One of the World’s Top Convention Centers 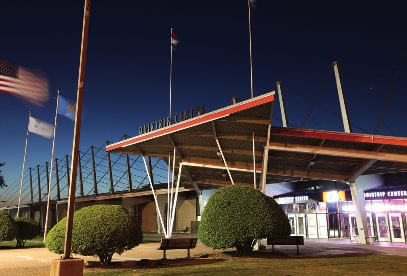 Located in midtown Tulsa, Expo Square holds more than 400 events each year, including exhibits and banquets. With parking for 11,000 (outdoor space also available) as well as on-site catering and a restaurant, the possibilities are endless. Farm shows, home shows, and auto events along with activities that include horseracing and a water park are just the tip of the iceberg.

• The QuikTrip Center, one of the largest clearspan buildings in the world, provides 354,000 square feet of column-free space under a cable-suspended roof and the building spans 448,400 total square feet on two levels, connected by side ramps and stairs.

• The Built Ford Tough Livestock Complex is home to 700,000 square feet of versatile barns and arenas.

• Expo Square Pavilion is a flexible arena that can go from an ice floor to a basketball court with various rooms, a ticket office, ETC-controlled lighting system, padded chairs and skyboxes.

• The RV Park is open attendees or exhibitors at Expo Square events.