The former Ford Norfolk Assembly Plant location will become one of the country’s next alternative energy plants, according to the Jacoby Group in Atlanta.

The plant has a total land area of 109 acres of industrially-zoned waterfront and rail-served land with approximately 2.6 million square feet of manufacturing facilities and convenient access to I-464 and I-64. The plant has 1,500 feet fronting the Eastern Branch of the Elizabeth River and a 450-foot concrete pier has been constructed to the barge-depth channel.

Norfolk is also moving forward in the development of offshore wind energy. The Virginia city is a member of VOW, Virginia’s Offshore Wind Coalition. Our shipbuilders, fabricators, distributors and integrated electronic system providers are representative of the supply chain resources that will be needed to make offshore wind energy a reality.

Proponents of commercial wind power 12 miles or beyond Virginia’s coast believe the giant turbines could ultimately provide 10 percent of the state’s annual electricity demand and operate without incident in the military’s busy seas.

The Department of Defense is studying 25 tracts identified for optimum winds. A recent report identifies 18 tracts as compatible with military needs and rules as long as certain guidelines are met. They were not detailed in the report. 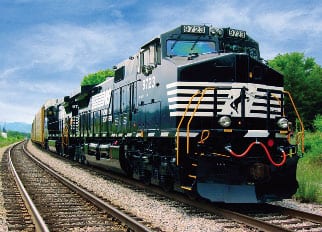 Norfolk Southern Corp. participated in the location of 70 new industries and the expansion of 23 existing industries along its rail lines in 2009, according to figures released by the company.

New plants and expansions represented an investment of more than $3.1 billion by Norfolk Southern customers and are expected to create 3,000 jobs in the railroad’s territory, eventually generating more than 138,500 carloads of new rail traffic annually.

The energy sector anchored our results during 2009,” said Newell Baker, assistant vice president industrial development. “Our group assisted in the location or expansion of 24 energy related facilities in 12 states across our service area. Ethanol production and distribution accounted for the lion’s share of energy projects, with 11 new and expanded facilities that began to receive NS rail service in 2009.”

The balance of other projects secured during 2009 was distributed among several of the broad product areas Norfolk Southern serves.

During the past 10 years, Norfolk Southern’s Industrial Development Department has participated in the location or expansion of 1,084 facilities, representing an investment of $23.9 billion and creating nearly 50,000 customer jobs in the territory served by the railroad.

Norfolk Southern Corp. is one of the nation’s premier transportation companies. Its Norfolk Southern Railway subsidiary operates approximately 21,000 route miles in 22 states and the District of Columbia, serving every major container port in the eastern U. S. and providing efficient connections to Western rail carriers. Norfolk Southern operates the most extensive intermodal network in the East and is North America’s largest rail carrier of metals and automotive products.

Polymer Group Inc. has started a major expansion of its Waynesboro, VA plant, with the project representing a $65 million investment.The Charlotte-based nonwovens manufacturer is installing production equipment at the site through a lease agreement under a joint venture between GE Capital and ING Capital.

“The installation of this advanced equipment enables PGI to deliver differentiated products to customers that will achieve enhanced and improved barrier, softness and opacity compared to the current marketplace capabilities for use in such products as diapers, and surgical gowns and drapes.”

The project will add 41 jobs to the Waynesboro operation. The expansion is slated for completion in the second half of 2011.Polymer Group chose the Virginia site for the project earlier this year, selecting it over the company’s Mooresville plant. Incentives may have been the key to the deal. Virginia promised $1.5 million in two grants, as well as job-training assistance for the new employees. The two operations competed for the project for at least six months.The addition would have nearly doubled the size of the company’s 210,000-square-foot plant in Mooresville Business Park. The facility employs 115 workers.