Gov. Pat Quinn has announced an approximately $4 million investment package to assist Astellas Pharma US, Inc. in establishing their new corporate headquarters for the Americas in Glenview. The state’s business package will leverage $140 million in private investment and will create 150 new jobs, further strengthening the economy of Northeast Illinois.

“I am pleased Astellas selected Illinois for its new headquarters for the Americas,” said Gov. Quinn, who attended the company’s groundbreaking ceremony. “This major investment will create new jobs and generate economic activity throughout the region. At the same time, this decision highlights Illinois role as a Midwestern leader in the life sciences business and its emergence as a vital base of operation for the biopharmaceutical industry’s future growth.”

Construction of the new headquarters is scheduled to be completed in the spring of 2012. It will include two six-story buildings totaling 425,000 square feet. The buildings and site will emphasize sustainability and the complex is designed to achieve LEED Gold certification. The company’s current Deerfield-based employees will be relocating to the new headquarters.

“At Astellas, we measure success not only by bringing innovative and effective pharmaceuticals to patients and physicians, but also by our contributions to local communities and protection of the environment,” said Seigo Kashii, president and CEO of Astellas Pharma US, Inc. “Today we are fulfilling our vision for continued growth through our groundbreaking for a new corporate headquarters.”

The state’s investment package, administered by the Department of Commerce and Economic Opportunity (DCEO), will consist of Economic Development for a Growing Economy (EDGE) corporate income tax credits, which are based on job creation, and Employer Training Investment Program (ETIP) job training funds that will help enhance the skills of its workforce.

“In order for our economy to continue growing, we must continue making strategic investments on the local level that will create jobs and support long-term sustainable growth,” said DCEO Director Warren Ribley. “Our investment in Astellas will pay dividends for this region and the state.”

The Illinois Department and Commerce and Economic Opportunity (DCEO) and BOMAG Americas, Inc. have announced that the company will consolidate its domestic manufacturing operations, currently located in Illinois and Missouri, to the company’s U.S. headquarters located in Kewanee. The investment is contingent upon the retention of 100 jobs, and will help further economic development in the region.

“Manufacturing is critical to the Illinois economy and the Midwest. This investment will help ensure Illinois can continue to keep good-paying manufacturing jobs in the state, while helping Bomag continue to grow their operations,” said DCEO Director Warren Ribley.

The state of Illinois is providing a $400,000 business investment package, which will leverage $2 million in private investment by the company.

The business investment package, administered by DCEO, includes Economic Development for a Growing Economy (EDGE) corporate income tax credits which are based on job creation and Employer Training Investment Program (ETIP) job training funds that will help enhance the skills of its workforce.

“We at BOMAG Americas are excited that the State of Illinois is willing to provide this incentive in such difficult economic times. It remains our goal to be a competitive manufacturer on a global basis. This incentive combined with other recent initiatives will help maintain jobs in our backyard,” said BOMAG Chief Financial Officer Chris Cyr.

BOMAG is a world leader in compaction equipment manufacturing. Ranging from vibratory tampers and plate compactors to recycling equipment and landfill compactors, Bomag has the largest line of the finest compaction equipment in the world. Bomag employs more than 1500 people worldwide and has major manufacturing plants in Europe, North America and Asia and a growing number of subsidiary companies around the world. 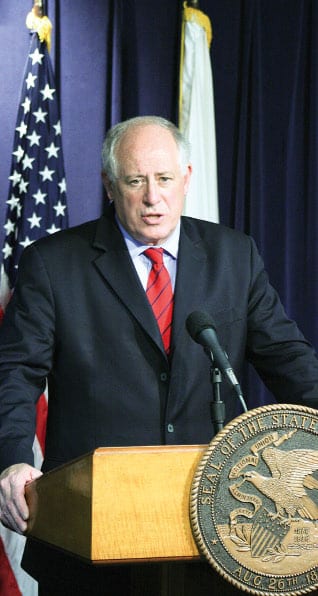 Illinois has won more than $60 million dollars in federal funding for broadband through the American Recovery and Reinvestment Act (ARRA), the governor’s office recently announced.

“So far we have helped win more than $60 million dollars in federal aid for Illinois broadband technology projects, and through our capital program and the support of state agencies, we will keep pushing.”

The Illinois Jobs Now! capital program, a job generation and capital improvement program that will revive the state’s ailing economy by creating and retaining over 439,000 jobs over six years, designated $50 million dollars to use as local match for exceptional, federally-funded broadband projects capital program. The state is using the Illinois Jobs Now! program as a conduit to access more than $3.7 billion in ARRA funding.

“The National Broadband Plan encourages us to continue building up our communities with affordable, world-class, high-speed Internet services,” said Gov. Quinn. “In Illinois we are committed to working with local, state and federal leaders in the public and private sectors to secure more funding to accelerate our technology accomplishments.”