Incentives and initiatives in a supportive business climate—along with an obvious geographic advantage—will prove once again that Mississippi is a business force to be reckoned with.

In his state of the state address, Mississippi Gov. Haley Barbour said “2010 is the year we will help lead America out of this global recession; the year when we pick up where we left off before this recession sidetracked our growing economy and rising incomes.” He then backed the statement up by helping to create and renew incentives and initiatives that would do just that.

In October, the Mississippi Development Authority (MDA), the state’s lead economic and community development agency, held events around the state for local economic developers during a nine-city rollout of the new PriorityOne program.

An effort of MDA’s Existing Industry and Business (EIB) Division, PriorityOne is a key component of the agency’s business retention and expansion program. Goals of PriorityOne include assisting businesses in solving immediate and long-term problems, promoting economic development and job creation and strengthening and diversifying the local economy. To achieve these goals, MDA staff and local economic developers interview businesses throughout the state to assess their particular needs and concerns, using the PriorityOne survey questions as a guide. All survey results are entered into a database. MDA then analyzes and reports the results, in the aggregate, to each community. With this information, local developers and state officials can provide relevant assistance to community businesses.

The information PriorityOne provides to local officials will assist them as they define their communities’ priorities and determine how best to allocate their resources. At the state level, this program will enable MDA to develop policy and implement programs that will be most effective in assisting the state’s existing businesses.

“The PriorityOne program . . . will be beneficial for businesses around the state, particularly during a time when economic development efforts and job creation are critical to maintaining a healthy economy,” said Chandler Russ, EIB Division director during the roll-out.

Gov. Barbour also created a partnership with Louisiana Gov. Bobby Jindal to launch The Aerospace Alliance, a 501(c)(6) private/public organization that will establish the Gulf Coast and surrounding region as a world-class aerospace, space and aviation corridor.

“This alliance will go far in promoting our region for what it is—one of the largest aerospace corridors in the world and a great place for companies in this sector to do business,” says Gov. Barbour. “The Gulf Coast states share geographic proximity, a long tradition of aerospace and aviation activities and a skilled and experienced workforce; and by joining together, we will be well-positioned to take advantage of opportunities to grow this sector in our region.”

The members of The Aerospace Alliance include business leaders, economic development professionals and government officials. By promoting their common assets and the region’s long-standing tradition of excellence in the aerospace industry, participating states and organizations will seize opportunities to grow the sector, attracting more jobs and suppliers to the region. Members will advocate for policies, programs and specific aerospace projects on the local, state and national level.

The Gulf Coast region already is home to some of the world’s most advanced aerospace installations, a number of key NASA facilities and numerous military installations critical to the Department of Defense flight missions and training. The region is centrally located to markets across the U.S. and offers access to global markets via air and deep-water ports.

The first priority of The Aerospace Alliance is to help secure the KC-45 aerial tanker program for the region. If the KC-45 aircraft is selected, the tankers will be assembled in Mobile, AL, bringing 48,000 direct and indirect jobs to the region. With the tanker program, the area would be one of the largest in the world to build large-body aircraft, along with France and the Pacific Northwest. The Aerospace Alliance will identify, educate, organize and activate allies to aggressively communicate why the KC-45 is the best solution for the warfighter, for the Gulf Coast and surrounding region, and ultimately for the United States.

While the KC-45 is the first priority for The Aerospace Alliance, it is not the only one. Mississippi, Alabama, Louisiana and Florida are currently home to manufacturers of helicopters, missile defense systems, composite aircraft structures, engine components and many R&D firms. The Alliance will collaborate to work towards growing these aerospace, aviation, space and defense industries in the region.

“Last year taught us something: while we all know about our long tradition of aerospace excellence and the quality and skill sets of our workforce, obviously some parts of the country (Kansas and Washington State) might not be aware,” says AL Gov. Bob Riley. “We are going to educate them. We will work together to promote our region’s many assets. We will work together to advocate for policies, programs and specific aerospace projects. The programs we attract will in turn attract suppliers, bringing even more jobs and development. Our first initiative is to win the KC-45 tanker, our first lesson is geography—Mobile, AL and the Gulf Coast States are part of the U.S. and our jobs are American.”

Mitch Waldman, Northrop Grumman Aerospace Systems Vice President applauded their efforts, saying, “We already know that the Gulf Coast is a center of excellence in defense, aviation and aerospace. We look forward to working with governors and leaders of Aerospace Alliance states, and the many members and supporters of The Alliance, to spread the word to the rest of the world.”

Like all states, Mississippi has been impacted by the global recession, but state economic development officials continue to be relentless in their efforts to support and retain existing Mississippi businesses, attract new investment to the state and position Mississippi for a strong economic recovery in the months to come. 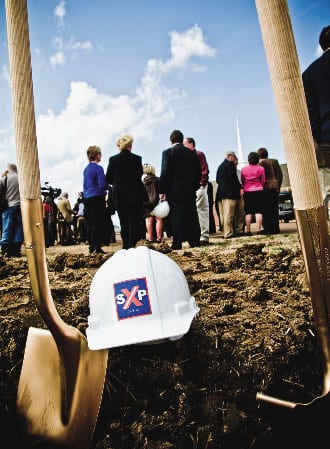 In January, Wilh. Schulz GMBH, a global supplier of pipe components based in Krefeld, Germany, announced it was locating its first North American manufacturing facility in Tunica County, MS. The company’s new division, to be known as Schulz Xtruded Products, will create 500 jobs for the residents of the Mississippi Delta over the next five years. The facility, which represents a $300 million investment and will be a 450,000-square-foot facility that will produce metallugically bonded seamless clad pipe for the oil and gas industries. Production is expected to start by the end of the year.

In April of this year, Twin Creeks Technologies, a venture-backed solar technology company, announced its plans to build a solar panel production facility in Senatobia, MS, creating more than 512 jobs over the next five years. The new facility will use the company’s proprietary technology to produce photovoltaic solar panels. It will be the first renewable solar technology production plant in the state.

Schulz officials considered more than 300 communities before selecting the Mississippi Delta location. Twin Creeks also conducted a global search, which included more than 25 U.S. sites in six states. But both companies were drawn to Mississippi.

In any economy, the advantages of doing business in Mississippi resonate with companies, large and small. At first glance, the state’s location, central to both the East and West coasts and bordered to the north by Memphis—a major U.S. distribution hub and home to FedEx—and to the south by the Gulf of Mexico, is a key benefit for companies across a range of sectors.

In fact, a number of companies have located distribution or warehousing operations in Mississippi to take advantage of the state’s prime location. In March, Siemens, a leading supplier of manufacturing, transportation, building and lighting systems, announced it was locating one of its distribution operations in a 619,000-square-foot building in Southaven, MS, near Memphis International Airport, and was bringing approximately 150 jobs to the state. Company officials noted that the Southaven location provided Siemens’ Industry Sector with a strategic location from which to better serve its customers.

Mississippi’s fully integrated transportation network allows businesses to take advantage of the state’s geographic location. Mississippi’s highways; 2,800 miles of railroad track; 80 airports; and 15 ports, two of which are deepwater ports on the Gulf Coast that provide access to worldwide commerce, allow businesses to quickly get raw materials in and finished products out to market.

The state’s workforce is dedicated and productive, and time and again executives cite the quality of Mississippi’s workforce when asked why their companies chose to locate or expand operations in the state. 15 percent of the state’s workforce has experience in manufacturing, the fifth-highest per capita in the nation, and Mississippi workers are engaged in advanced manufacturing operations ranging from helicopter assembly, to unmanned aerial vehicle production, to the manufacture of composite components for jet engines. The productivity of their workers is helping businesses in MS maintain a competitive advantage.

Mississippi also provides a supportive business climate, where the cost of doing business and the cost of living are low, and Mississippi officials are willing to work with existing and prospective businesses to help ensure their long-term success in the state. “Mississippi’s leadership, from Governor Haley Barbour, to the heads of state agencies such as the director of the Mississippi Department of Environmental Quality or myself, to other state and local officials, works to understand businesses’ needs,” said Gray Swoope, executive director of the MDA. “We make a concerted effort to be responsive to companies’ needs and to do so in a timely manner, and we work together at the state and local levels to provide solutions that make economic development projects a reality.”

For more information about the benefits of a Mississippi location, visit www.mississippi.org or contact the Mississippi Development Authority at 800-360-3323.