Industry-specific clusters are thriving along I-90 in northern Illinois due to close collaboration and proximity.

One of the most successful industry-specific manufacturing hubs in the United States is located in an area known as the Golden Corridor, which stretches along I-90 in northern Illinois.

In 2009, business and financial services employed 31,758 in the Golden Corridor; information technology and telecommunications, 17,185; biomedical and biotech, 12,009; defense and security, 10,191; advanced materials manufacturing, 7,320; and computer and electronics manufacturing, 4,186.

A burgeoning cluster of precision machine tool producers and their suppliers has taken root in the Corridor, centered on several locations—Schaumburg, Elgin, Rolling Meadows, and Hoffman Estates. Among the major precision tool makers to establish operations in the Golden Corridor are industry giants Mori Seiki, FANUC Robotics, Amada, BIG Kaiser and Mazak Optonics. 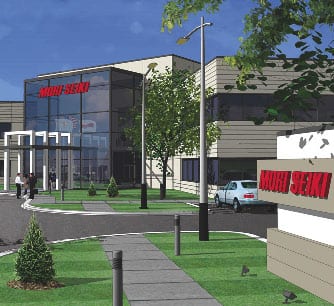 Amada decided to place its Amada Solution Center in Schaumburg because it was impressed with the Golden Corridor’s reputation for fostering an environment that encourages innovation and entrepreneurship, key factors in attracting highly skilled workers, a company spokesman said.

The 133,000-square-foot Solution Center, the design of which was inspired by legendary architect Frank Lloyd Wright, provides access to technological expertise and research, real-time demonstrations of metal fabrication systems, and advanced training and development to companies throughout North America.

According to several toolmakers, close proximity to suppliers and access to a huge market also were major attractions for locating within the Golden Corridor.

“They all work together on various aspects of toolmaking. One may make a material holder while another performs a lathe process or another supplies the robotics to implement the cutting of the tool,” explains Gary Skoog, Hoffman Estates economic development manager.

Elgin, Hoffman Estates, Schaumburg and Rolling Meadows currently are spearheading an effort to create the Golden Corridor Innovation and Science Park. Unlike a traditional science and technology business park, this entity is planned as more of a “virtual” park that will enable companies to network with each other to promote innovation. Such a network—using International Association of Science Parks guidelines–would facilitate communications and collaboration regarding supply chain management, cooperative outsourcing, and available labor pool, among other issues.

Formative plans for the Innovation and Science Park envision a “three-legged stool:” the first leg is the network; the second leg consists of institutions of higher education in the area, many of whom have licenses for patented processes, are growing entrepreneurship programs, and are increasing their interface with the private sector; the third leg involves federal, state, county and local governments and government-funded programs like the federal Economic Development Administration University Centers which promote innovation.

“Our primary mission is to help businesses grow and thrive in a competitive global marketplace through creating a public-private environment that encourages innovation and collaboration both within, and across business sectors,” reads the mission statement for the Innovation and Science Park. “Our goal is to provide a virtual innovation network that works with local, regional, state, federal and international resources, trade and professional organizations and colleges and universities in the region to create a unique synergy to attract world-class businesses to the region.”