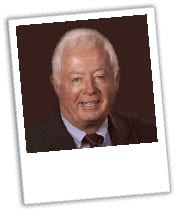 BF: EDGE has focused investments in aerospace, agriculture, biotechnology, energy and weather science. Will the new funding include other initiatives?

PR: In 2009 the EDGE program was expanded to include the following areas: aerospace, agriculture, biotechnology, energy, information technology, nanotechnology, sensors, and weather science.  Each year the EDGE Fund Policy Board reviews the focal areas for the upcoming funding competition and collectively chooses those areas in which Oklahoma has strong technical expertise and where there are commercial opportunities.

BF: The governor has indicated that designated funding to the EDGE endowment will not begin flowing until the state’s budget crisis is over. Will this delay any commitments to specific projects?

PR: The first round of funding was committed in 2008 to 5 initial companies, and in 2009 another 5 companies were added to the list of EDGE awardees. The funds available each year are the earnings from the EDGE endowment and thus these will continue to be available each year.

BF: Have any of the projects initiated under the EDGE program produced tangible commercial applications?

PR: Several of our projects have produced products available commercially.    OrthoCare creates high-technology prosthetics; last year, they successfully launched their Compas technology for sale and distribution, as well as announcing four new technologies available in September 2009.  There also have been successes in the creation of the SEAM Industries, bringing Oklahoma to the forefront of shape engineering in the MRO (Maintenance, Repair, and Overhaul) industry. Our wind energy project has created a software package that brings together key data for the establishment and operation of wind farms.


BF: In the last round of EDGE projects, 94 pre-proposals were winnowed down to 18 proposals that were given a technical review, resulting in five projects. Are there any plans to expand or speed up the proposal review process?


PR: The EDGE Policy Board distributed $10.5M in 2008 and $7.3M in 2009. The amount of funding available each year depends on the earnings from the EDGE endowment. As the EDGE endowment grows, more money will be available to fund projects. In 2009, five new projects were awarded funding through the EDGE program. Each year the pre-proposals and the proposals are extensively reviewed by a panel of Advisory Committee experts, the EDGE Policy Board, a team of technical reviewers and the EDGE Administrative staff. Because these are public dollars and because there are so many requests for funding from the EDGE fund, we are very careful and thoughtful about each investment. The process does take several months because it involves review from both technical and business perspectives.

TWO STEPS FORWARD, ONE STEP BACK 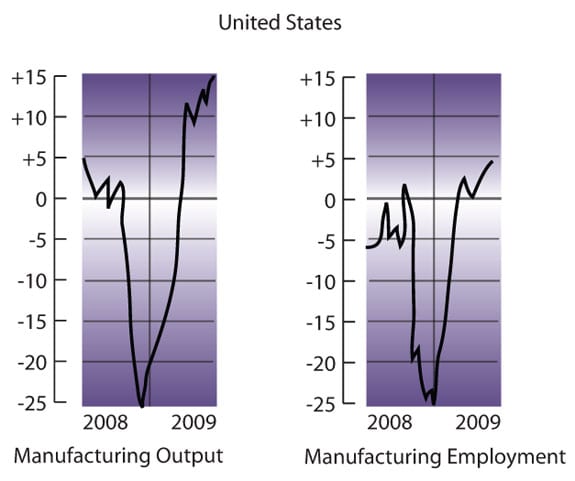 As the U.S. economy moves firmly onto the path of recovery, it is becoming increasingly clear that one essential element of the return to growth will lag behind other economic indicators: jobs.

The unexpectedly robust GDP growth figure for the fourth quarter of 2009—5.7 percent—was tempered by reports that the economy shed another 20,000 jobs in the same period. A big improvement over early last year, when jobs were being cut at a rate of more than 600,000 per month, but still not in positive territory.

More mixed news came from a manufacturing output and jobs index calculated by the U.S. Institute for Supply Management. The results are reported on a scale of 0 to 100, with 0 being the break-even point above which more manufacturers are raising output or employment than are cutting back.

As indicated in the graphic below, the U.S. has posted an impressive V-shaped leap in manufacturing output, but this has not been matched by the recovery in employment.