The Volunteer State surges into a leadership position in green-collar job creation with an aggressive and innovative economic development strategy.

Tennessee has been named the winner of Business Facilities‘ third annual State of the Year Award competition.

The Volunteer State won this coveted citation due to an aggressive and creative development effort that defied the economic downturn with a series of multi-billion-dollar projects.

“Every time we open the mail, we expect to see another picture of Gov. Bredesen hoisting a newspaper headline shouting about another mega-project triumph,” said Business Facilities Editor in Chief Jack Rogers.

Last year’s headlines trumpeted Chattanooga’s selection as the site of Volkswagen’s new vehicle assembly plant, marking VW’s return to U.S. manufacturing after a 20-year absence and moving Tennessee into the top tier in the automotive sector. The Volkswagen project was the Silver Award winner in Business Facilities’ 2008 Economic Development Deal of the Year Awards competition.

“We thought it would be hard to top the VW announcement, but Tennessee managed to do it,” Rogers said.

Putting Tennessee over the top in the 2009 State of the Year contest was a “doubleheader”—back-to-back announcements that two of the world’s largest polycrystalline silicon producers are locating major facilities in Tennessee. 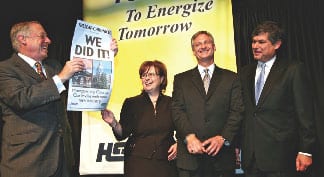 Hemlock Semiconductor, majority owned by Dow Corning, and European chemical giant Wacker Chemie AG are investing an estimated $3 billion in two polysilicon plants in the Volunteer State, vaulting Tennessee into a leadership position in the green-energy supply chain. Polycrystalline silicon is used in the production of solar panels and semiconductors, among other applications.

Hemlock Semiconductor’s decision to locate its plant in Clarksville, TN also was cited as the Silver Award winner in Business Facilities’ 2009 Economic Development Deal of the Year Award.

Other projects that factored into the Tennessee’s selection as State of the Year were an investment of $129 million by Norfolk Southern and a $100-million project by Asurion that will together create 800 new jobs in the Nashville area.

A critical factor in Hemlock’s decision to locate in Tennessee was the state’s proactive position regarding the price of electricity, a key concern of the polysilicon manufacturer. State officials and the Tennessee Valley Authority worked closely to address this issue.

Tennessee expanded its Green Energy Tax Credit, which permits green-energy manufacturers to eliminate uncertainty and risk associated with potential rising electricity costs as well as any future federal carbon tax which may be enacted.

According to a NewsChannel5, a Clarksville-area TV news outlet, more than a thousand local companies have expressed interest in being part of the Hemlock Semiconductor plant construction.

“I understand 1,400 companies have shown interest in this,” said construction manager Allen Cox.

Instead of hiring one company to handle everything, Hemlock is dividing the work into hundreds of smaller projects. “The real plan is to provide as much work as we can for the local contractor,” said Cox.

Project officials are in the process of screening the companies who have expressed interest in the construction work. They expect to bid out between 200 and 400 different projects before the plant is completed.

The growth of the Clarksville metropolitan area and Clarksville’s proximity to the Nashville area’s skilled workforce also were cited as major factors in Hemlock’s decision.

In February, Wacker Chemie AG of Munich announced plans to build a $1-billion facility for the manufacture of hyperpure polycrystalline silicon in Bradley County, TN.

Wacker officials cited Tennessee’s well-developed infrastructure and the cooperative partnership of state agencies, local government, the Tennessee Valley Authority and the local chamber of commerce. As part of its investment, Wacker has qualified for statutory incentives on the state and local level, including the FastTrack Infrastructure Development Program, the FastTrack Job Training Assistance Program and the Super Jobs Tax Credit. The strong partnership between the state of Tennessee and TVA is allowing the company to take advantage of industrial electricity rates approximately half those found in Germany.

Gov. Phil Bredesen hailed the ranking as the result of years of hard vork in the Volunteer State.

“Tennessee has worked hard to be a leader in the clean energy sector and it’s clear from the Pew report that our efforts are yielding dividends in job creation,” Bredesen said. “Expanding our focus on energy efficiency, renewable power production and other clean energy activities is helping jumpstart our state’s economy, and it happens to be the right thing to do for the environment. I’m proud that the Volunteer State is leading the way in growing the clean energy economy.”

The Pew Center reported more than 15,000 jobs were created in Tennessee during the years covered by the survey. Gov. Bredesen highlighted the diversity of job opportunities offered to Tennesseans in the clean energy field.

“I think the best thing about clean energy jobs is that they are incredibly diverse,” Gov. Bredesen said. “They range from research to manufacturing, from engineering to installing, and the list goes on from there. There’s a host of opportunities for Tennesseans with all kinds of backgrounds in this sector.”

During his keynote address at the 2009 Governor’s Conference on Economic and Community Development, Gov. Bredesen announced that the U.S. Department of Energy had confirmed funding from the American Recovery and Reinvestment Act to support the Volunteer State Solar Initiative in Tennessee.

Tennessee will use its State Energy Program Recovery Act funds to establish the Volunteer State Solar Initiative, a comprehensive solar energy and economic development program, focusing on job creation, education, renewable power production, and technology commercialization. Building upon current efforts, the program will stimulate short-term economic growth, while positioning the state to support long-term expansion of the solar industry. Recovery Act funds will enable the state to accelerate national market transformation in a manner that will create jobs and ensure a clean energy future.

The initiative consists of two projects: The Tennessee Solar Institute at the University of Tennessee (UT) and Oak Ridge National Laboratory (ORNL), which will focus on industry partnerships to improve the affordability and efficiency of solar products; and the West Tennessee Solar Farm, a five-megawatt 20-acre power generation facility in Haywood County that will be one of the largest installations in the Southeast and serve as a demonstration tool for education and economic development.

As the recession deepened in early 2009, Volkswagen reaffirmed its commitment to move ahead with its new assembly plant in Chattanooga. The German auto maker said it plans to use North American suppliers for 85 percent of the parts and components in the new sedan it will make at the plant; the Chattanooga area is gearing up to attract suppliers for the facility.

J.Ed. Marston, the Chattanooga Area Chamber of Commerce’s vice president for marketing, said that VW’s using such a high North American content in the sedan opens lots of opportunities to recruit suppliers. “We’ve understood from the beginning of the project that, because of VW’s commitment to sourcing from North America, we’d have substantial opportunity to attract new investment,” he said.

The Chattanooga area is receiving “strong interest” from a variety of suppliers, he said.

“At this point, those interactions are prospective, but there is substantial activity. As VW moves down the project line, we feel very good about our positioning,” Marston added.

The number of supplier jobs is expected to top the 2,000 people to be employed by the VW plant. The  plant is expected to produce 11,477 supplier and other spin-off jobs, according to the University of Tennessee.

VW already has set up a 75-member purchasing group in the city to find and deal with suppliers for the new vehicle. The group is operating independently from one in Puebla, Mexico, site of VW’s only other North American production facility. The size of the purchasing group will grow as work progresses on the $1 billion auto assembly plant, slated to be in production in 2011 at Enterprise South Industrial Park.

VW has said it wants to triple the number of cars it sells in the United States, hitting 1 million by 2018.

Gov. Bredesen and Matt Kisber, Commissioner of Tennessee’s Department of Economic and Community Development, both expressed pride in Tennessee’s selection as our 2009 State of the Year.

“With our strong and productive workforce, low taxes and nationally recognized business climate, Tennessee continues to distinguish itself as one of the most business-friendly states in the nation,” Governor Bredesen said. “I appreciate this recognition of our success in securing corporate investment and creating higher skilled, better paying jobs for the people of our state.”

“Despite the economic downturn, Tennessee welcomed more than 16,700 new jobs and $3.1 billion in new capital investments in 2009,” said Commissioner Kisber. “Job creation continues to be our top priority, and we are grateful to Business Facilities for recognizing the efforts to generate economic growth in our state.”

Four other states—Virginia, South Carolina, Louisiana and North Carolina—also posted strong showings in this year’s State of the Year contest.

Business Facilities congratulates Tennessee for its well-deserved honor as our 2009 State of the Year.