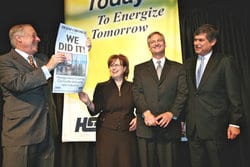 Tennessee has been named the winner of Business Facilities’ third annual State of the Year Award.

The Volunteer State won this coveted citation due to an aggressive and creative development effort that defied the economic downturn with a series of multi-billion-dollar projects.

“Every time we open the mail, we expect to see another picture of Gov. Bredesen hoisting a newspaper headline shouting about another mega-project triumph,” said Business Facilities Editor in Chief Jack Rogers.

Last year’s headlines trumpeted Chattanooga’s selection as the site of Volkswagen’s new vehicle assembly plant, marking VW’s return to U.S. manufacturing after a 20-year absence and moving Tennessee into the top tier in the automotive sector. The Volkswagen project was the Silver Award winner in Business Facilities’ 2008 Economic Development Deal of the Year Awards competition.

“We thought it would be hard to top the VW announcement, but Tennessee managed to do it,” Rogers said.

Putting Tennessee over the top in the 2009 State of the Year contest was a “doubleheader”—back-to-back announcements that two of the world’s largest polycrystalline silicon producers are locating major facilities in Tennessee.

Hemlock Semiconductor, majority owned by Dow Corning, and European chemical giant Wacker Chemie are investing an estimated $3 billion in two polysilicon plants in the Volunteer state, vaulting Tennessee into a leadership position in the green energy supply chain. Polycrystalline silicon is used in the production of solar panels and semiconductors, among other applications.

Hemlock Semiconductor’s decision to locate its plant in Clarksville, TN, also was cited as the Silver Award winner in Business Facilities’ 2009 Economic Development Deal of the Year Award.

Other projects that factored into the Tennessee’s selection as State of the Year were an investment of $129 million by Norfolk Southern and a $100 million project by Asurion that will create 800 new jobs in the Nashville area.

A critical factor in Hemlock’s decision to locate in Tennessee was the state’s proactive position regarding the price of electricity, a key concern of the polysilicon manufacturer. State officials and the Tennessee Valley Authority worked closely to address this issue.

Tennessee expanded its Green Energy Tax Credit, which permits green-energy manufacturers to eliminate uncertainty and risk associated with potential rising electricity costs as well as any future federal carbon tax which may be enacted.

The growth of the Clarksville metropolitan area and Clarksville’s proximity to the Nashville area’s skilled workforce also were cited as major factors in Hemlock’s decision.

Business Facilities congratulates Tennessee for its well-deserved honor as our 2009 State of the Year. 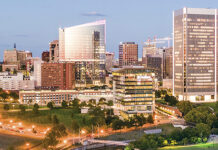 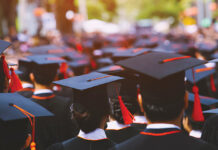 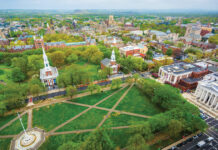