Toyota Motor Corp. has announced that it will relocate production of the Tacoma pickup from a plant in California to its manufacturing facility in San Antonio by next summer.

San Antonio and Bexar County officials estimate 100,000 Tacomas will be produced annually following a $100 million retooling at Toyota’s San Antonio campus. The Tacoma line will diversify the plant with a second vehicle and as many as 1,100 new jobs to the facility. It will also create new jobs at 21 on-site suppliers. 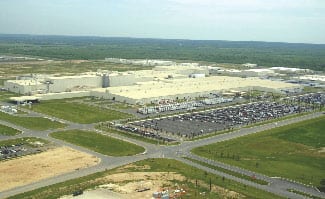 The Japanese automaker has ended its relationship with a joint venture plant in the San Francisco Bay area as part of an effort to reduce excess production capacity. Toyota will stop making vehicles at the New United Motor Manufacturing Inc. plant—its first manufacturing facility in the United States, which started in 1984 as a 50-50 business deal with General Motors—in March 2010.

The relocation will return work at the San Antonio plant, which has the capacity to build about 200,000 Tundras annually, back to two shifts for the first time since it shuttered for three months last summer to sell off excess inventory.

“This is what we wanted, a dual line to alternate with the Tundras,” a San Antonio Chamber of Commerce official said, according to wire service reports. “We had thought several years ago it might be the Highlander hybrid, but this plant and its workers have the flexibility to keep jobs strong there.”

Temporary plant workers who had been laid off in San Antonio or those who applied for Tundra work and didn’t get the job could be first in line for the new positions, Bexar County officials said.

Toyota’s decision to end its 25-year relationship with the NUMMI plant, which also produces the Corolla, came nearly two months after GM said it was pulling out of the joint venture. It marks the first time the Japanese automaker has closed a plant, either at home or abroad. In the midst of the current recession Toyota announced the first quarterly losses in its 70-year history earlier this year.

San Antonio Mayor Julian Castro said the announcement demonstrates the Texas city’s attractiveness to business looking for a skilled, low-cost workforce. “San Antonio is emerging as an economic powerhouse. This demonstrates the talent of the work force and the low cost of doing business in San Antonio, as well as a high level of public and private cooperation,” he said.

The chief executive of the Greater San Antonio Chamber of Commerce also credited workers at the Tundra plant for paving the way for the announcement.

San Antonio and Texas leaders began preparing an incentives package for Toyota several weeks before the relocation of truck production was announced. City and county officials said it includes a 10-year abatements on property taxes as well as state sales tax rebates on capital investments and new machinery to retool the plant. Additionally, Toyota could receive a $2,500 credit for every new hire from a “designated disadvantaged zone.”