Amylin Pharmaceuticals is nearing completion on a $400 million manufacturing facility in West Chester, OH that is expected to support at least 500 jobs in the Butler County area. 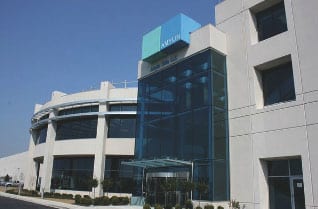 The biotech firm, which is based in San Diego, made a commitment in 2005 to invest in the Ohio facility. Company officials say the eventual footprint of the plant is dependent on the success of a new form of its diabetes treatment BYETTA©. The drug, administered by injection, is awaiting Food and Drug Administration approval.

“The manufacturing facility in Ohio is nearing completion. We have made great progress by finalizing the commercial-scale manufacturing process at the facility,” an Amylin spokesperson told Business Facilities.

“We are producing and shipping commercial scale material for use in ongoing exenatide (BYETTA)© once weekly clinical studies while we await approval of the drug from the FDA. The eventual footprint of the facility will be determined by the potential of exenatide once weekly, the product that we will manufacture there.”

Initially, the project envisioned a 151,000-square-foot biopharma plant costing about $150 million to set up and equip, to be run as a subsidiary of Amylin Ohio LLC. In 2005, Amylin purchased a 26-acre site, including existing buildings, for $9 million. Two years later, the company expanded its plans, purchasing an additional 17 acres for $4.5 million and upping its overall investment in the Ohio facility to $400 million.

The first phase of the project began in 2006. Filling and sterilization equipment installation began at the end of last year. Employment at the West Chester plant will be ramped up over a three-year period. “It’s a major, major expansion,” said Butler County Commissioner Michael Fox. “We worked with the state and the county on an incentive package.”

West Chester Township trustees also played a role in crafting incentives for the expansion of the Amylin project in 2007.

The state of Ohio, via the development arm the Ohio Department of Development, has committed around $117 million in benefits and financial assistance for the new manufacturing facility project, including $30 million provided by Butler County and West Chester Township.

Amylin also received a 10 year, 75% tax abatement, an agreement that requires them to reimburse the Lakota school district 100% of the taxes owed, totaling of over $4 million in the long run.

Part of the incentive deal is a public-private partnership to meet Amylin’s workforce and research and development needs by creating a partnership with adult career technical schools, community colleges and universities. BioOhio, a bioscience development organization, was able to help Amylin find suitable personnel for the facility. J&B Steel is the steel erector for the new sections of the facility buildings.

Amylin expects to ramp up production of a long-acting release formulation of exenatide, a compound in development for the management of Type 2 diabetes, at the facility. Amylin already manufactures a twice-daily formulation of the drug under the BYETTA© brand.

“This is a very important high technology investment for us,” said Greg Jolivette, president of the Butler County Board of Commissioners. “It validates Butler County as a site for biotechnology manufacturing and the quality of our work force.”

Amylin targeted the West Chester facility for expansion in part because it is strategically located near its technology partner Alkermes, a Cambridge, Mass.-based pharmaceutical company that has a facility in Wilmington. Eli Lilly and Co., based in Indianapolis, is also collaborating on the development on the long-acting exenatide formulation.

If approved by the FDA, exenatide would become the first once-weekly therapy to treat type 2 diabetes. Under the terms of Amylin’s agreement with Lilly, Lilly reportedly will make an initial cash payment of $125 million to Amylin and Amylin will supply exenatide for sales in the U.S. and to Lilly for sales outside the U.S. Lilly also is expected to reimburse Amylin for its share of the $500 million capital investment in the West Chester facility.

Butler Technology and Career Development Schools is moving and pushing ahead with plans for a new West Chester Township campus, focused on biomedical training. The project has an expected cost of $35 million.

Area leaders believe the new campus is a worthy investment, because it will help ensure a skilled workforce to a growing healthcare sector.

According to Butler Tech CEO Robert Sommers, construction could begin on the project, which will include a 400-student high school devoted to biomedical training, within the next two years.

“What we’re hearing from the community is, “When can you build and how quickly can you open to meet our needs?” Sommers told the Business Courier of Cincinnati. “It’s been one of those ideas that seems fairly simple to move forward with.”

Butler Tech, which has a $50 million annual budget, recently completed a study of community needs. The northern suburbs are experiencing a healthcare boom as their population grows, with players including the Health Alliance, Premier Health Partners, Cincinnati Children’s Hospital Medical Center and TriHealth all building facilities in the area in recent years.

Carol King, the top executive at the newly built West Chester Medical Center, said she anticipates having openings for many graduates in coming years. Her hospital has about 560 employees, enough to care for about 40 patients a day. But the hospital, which opened in May, has 162 beds, and King is focusing on growing the patient census rapidly over the next three years.

Many other employers also will be ready to hire the graduates from the new biomedical campus, said Colleen O’Toole, president of the Greater Cincinnati Health Council. 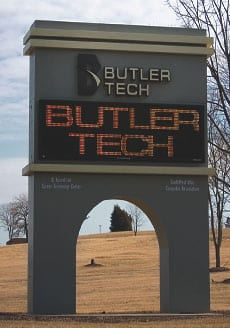 The curriculum for the new campus, to be built at Interstate 75 and Cincinnati-Dayton Road, is still being designed. High school students would graduate ready to enter the work force in tech or aide positions and also qualified to continue studies toward an associate’s or bachelor’s degree.

The West Chester Chamber Alliance also is expected to move to the campus.

The new high school in West Chester is the first ninth-through-12th grade high school for Butler Tech. Vocational schools, which work in cooperation with the districts in their area, typically teach only juniors and seniors.

Butler Tech has an option to purchase the land for the new building, but the project remains in the early planning stages. School officials hope to have the building open within the next three to five years.

A formal analysis outlining financials, space needs, specific programs and a business model is expected to be completed in November or December of this year.

Butler Tech make a substantial upfront investment in the construction project and issue bonds to cover the rest of the cost.

Growth of hospitals and medical campuses in the southern Dayton area, including Children’s Hospital and Atrium Medical Center, served as a catalyst for Butler Tech choosing the West Chester location. The school is hoping to form partnerships with nearby hospitals to create an immersive environment for the students, guidance for curriculum and opportunities for clinical training.

Bill Solazzo, director of marketing for the school, said the project has been in discussion for more than a year. Solazzo did not have a timetable for ground breaking, and said the school has yet to select engineering or architectural firms for the project. He said the school is not releasing specifics such as size, cost and location, as the land purchase has not happened.

The option expires Dec. 1 and Butler Tech’s board is set to vote on the land option Nov. 18. Currently, Butler Tech operates a similar medical-focused campus at the Greentree Health Science Academy in Monroe, which would relocate to the new space near West Chester. The current campus is in space leased from the Monroe Schools. About 200 juniors and seniors interested in the medical fields are currently at the school. However, with a goal to expand to 500 and add staff, the building would be too small.

Along with the Greentree Academy, Butler Tech operates two other campuses solely devoted to one career field, including a natural science center and a public safety education complex. The tech center teaches nearly 25,000 students at all of its Butler County campuses and in-district school programs and has more than 300 employees.

Solazzo did not say how large he expected the new high school to be, but said it would need space for specialized labs for medical coursework. Butler Tech’s plan fits in line with what other career technical education schools are doing across the country, according to The Association for Career and Technical Education, based in Alexandria, Va.

Buckeye Power Generating, LLC (Buckeye Generating), a subsidiary of Buckeye Power, Inc., of Columbus, OH, has secured 214 megawatts (MWs) of coal-fired base load generation in an acquisition of a nine-percent ownership interest in Ohio Valley Electric Corporation (OVEC) and an entitlement to the power from its Kyger Creek and Clifty Creek power stations.

Buckeye Generating, already the owner of nine percent of OVEC’s generation, reached agreement with another OVEC capacity owner, FirstEnergy Generation Corp., a subsidiary of FirstEnergy Corp., to acquire an additional entitlement from OVEC. The transaction is worth approximately $252 million.

“This gives us a bridge over uncertain regulatory and legislative times and buffers co-op members from the costs of additional base load generation,” said Pat O’Loughlin, vice president of power supply and chief operating officer.