BF: In May, the retail industry received a boost as consumers received, and spent, their economic stimulus checks. Do you view this as a temporary gain, or does the industry outlook seem positive for the rest of 2008?

TM: This is a great question. May’s retail sales increase may be a temporary fix as the economic stimulus checks sent people to the stores and relieved some of the pressure that many shoppers were feeling. However, since only half of the checks were distributed in May, we expect both June and July sales to be strong. Retailers will need to power through on their own for the second half of this year. On the positive side, many consumers chose to use their economic stimulus checks to pay off debt and save, so they will be in a better financial position when the holiday season rolls around.

BF: Are there any specific locations or hot spots that are emerging as leaders in the retail industry?

TM: There are two big hot spots in the retail industry right now. The first is urban areas. According to an NRF survey, retailers plan to open more new stores in downtown locations this year as traditional Main Streets become revitalized. In addition, the global frontier is a real opportunity for many U.S. retailers. With the weak dollar, smart companies are recognizing that this is the time to invest overseas and are opening new stores and creating online shopping opportunities to non-U.S. shoppers. That strategy is paying off, as Wal-Mart, Tiffany, and Timberland are all experiencing more growth from international audiences than U.S. consumers.

BF: What advice can you offer a retailer looking to open a shop in a new location?

TM: In addition to evaluating the average age, occupation, and income of potential shoppers, retailers should also look at competition in that market, the distance consumers travel to shop, and opportunities for growth. Smart retailers know that consumers in St. Louis vary greatly from those in San Diego, so products should be customized to fit each market.

According to a recent survey by the National Retail Foundation, increasing prices of gas and groceries have consumers planning to spend more of their tax rebate checks on necessities like gas and food rather than on discretionary items like electronics and apparel. In fact, the largest leap in rebate spending will come at the pump, as 17.2 million people plan to use some of their tax rebate check to pay for gas, up from 12.1 million people who planned to do so in February. The rising cost of everyday items like milk, bread, and rice also means that more consumers plan to spend their checks on groceries, with 21.2 million people using a portion of the check for food, up from 20.4 million people in February.

“Many retailers have already announced creative promotions to give consumers an extra incentive to shop with them,” says Phil Rist, vice president of strategy for BIGresearch. “Some retailers are helping customers stretch the value of their rebate check further by tacking on an additional 10 percent to gift cards purchased or holding special in-store promotions.” 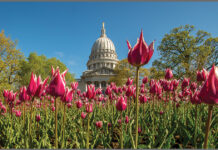