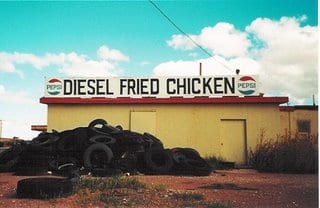 Apparently the emerging ethanol industry is wreaking havoc on the chicken industry. So, you might ask: what does an alternative energy fuel source have to do with chickens? The answer is *insert drum roll here* … a lot … so much so that the world’s largest poultry processor, Pilgrim’s Pride Corp., is blaming the ethanol industry and recently passed legislation supporting it for what the company’s president and CEO proclaims is a “crisis” in the chicken industry. And this “crisis” translates to a just-announced 1,100 jobs cut and several facility closings for Pilgrim’s Pride. (See the list at the end of the blog post.*)

So, the question still remains: What does an alternative energy fuel source have to do with chickens?

Well … it just so happens that the major ingredient in chicken feed (and one of the largest overall expenses in producing and delivering chicken products to consumers) is corn. And corn happens to be the main ingredient in (you guessed it) corn-based ethanol (I think the name gives it away here). Recent federal incentives for corn-based ethanol production have caused the price of chicken-feed to soar. Based on current commodity futures markets, the Pilgrim’s Pride total costs for corn and soybean meal to feed all their chickens in fiscal 2008 would be more than $1.3 billion higher than what they were two years ago, according to the company.

“Our company and industry are struggling to cope with unprecedented increases in feed-ingredient costs this year due largely to the U.S. government’s ill-advised policy of providing generous federal subsidies to corn-based ethanol blenders,” Chief Executive Officer J.Clint Rivers said in a press release.

This matter over the effects of the ethanol industry’s need for corn on the chicken industry has been a concern for a few years now, and seems to have hit critical mass with the Pilgrim’s Pride closings. Matthew Herman, manager of a Tyson Foods chicken production and processing complex in Monroe, NC testified before a House Agriculture Subcommittee at the beginning of last year that demand from ethanol producers has doubled the cost of corn and driven up by 40% the feed cost of the chicken industry alone. He also noted at this hearing that the livestock and poultry industries normally purchase more than half of the corn produced in the country to make feed for their animals. However, the rapidly expanding ethanol industry consumed more than two billion bushels of corn (18% of production) in 2006 and will take as much as 3.5 billion bushels in 2007.

And … even before that, Delmarva Poultry Industry, Inc. Executive Director Bill Satterfield, one of the keynote speakers at the October 12, 2006 annual meeting of the Salisbury-Wicomico Economic Development, Inc. in Salisbury, MD, commented during his speech that:

“A major concern to the poultry companies nationally, and here on Delmarva, is the increase in demand for corn to make ethanol. USDA estimates that about 14% of the nation’s corn went into ethanol last year and that will rise to about 20% this year. There is concern that this demand, which will increase as the number of American corn ethanol plants goes from 100 to about 150 in the coming years, will create a situation where the marketplace is a feed versus fuel situation. The ethanol tax credit of 50 cents per gallon gives more persons an incentive to produce and use ethanol, but how long can the federal treasury sustain this type of revenue avoidance? As the CEO of one major American poultry company said last week, it’s hard to compete with tax credits and subsidies.”

As I could care less about eating chicken or the chicken companies, I say give all the corn for chicken feed to the ethanol producers, and eat more vegetables!